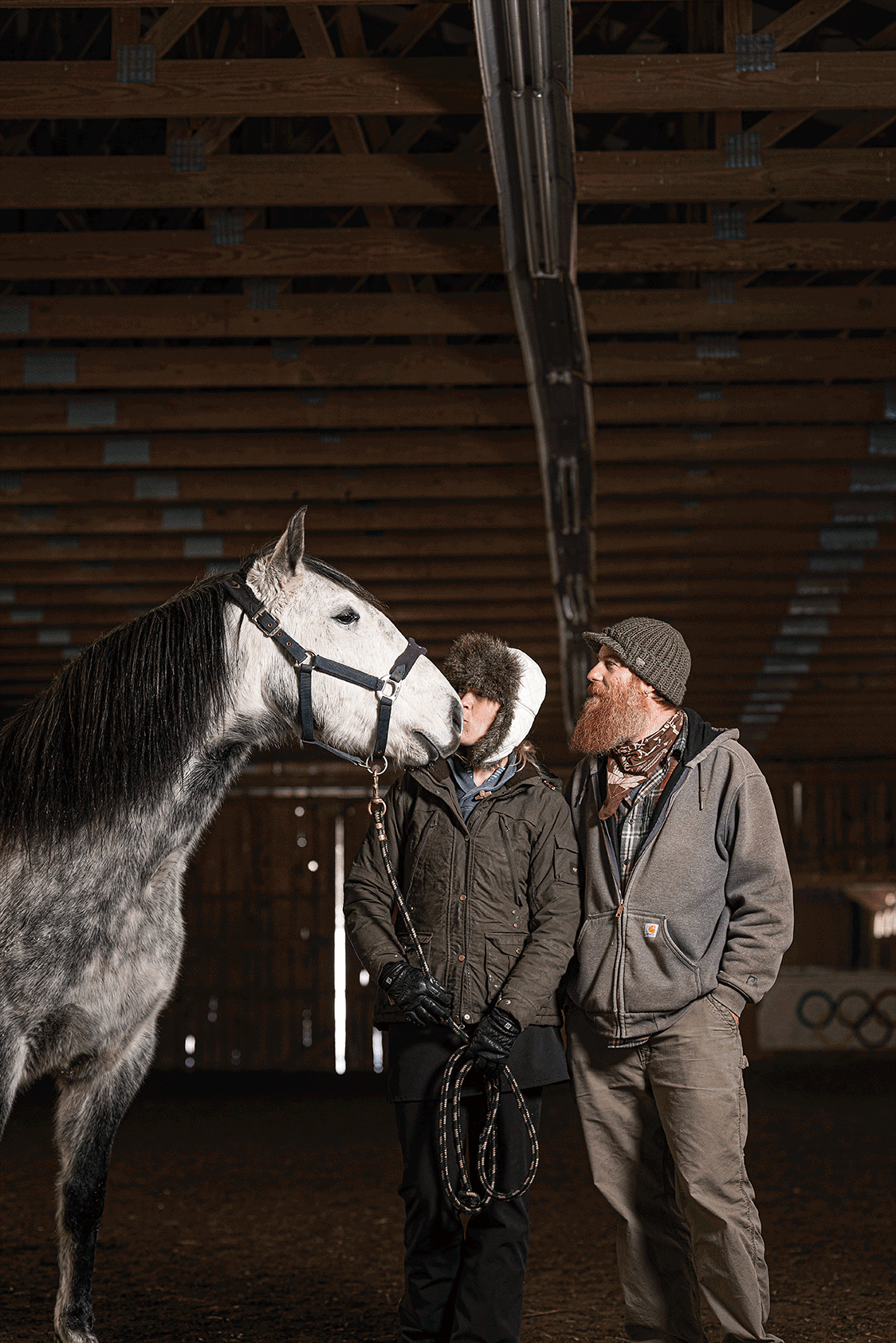 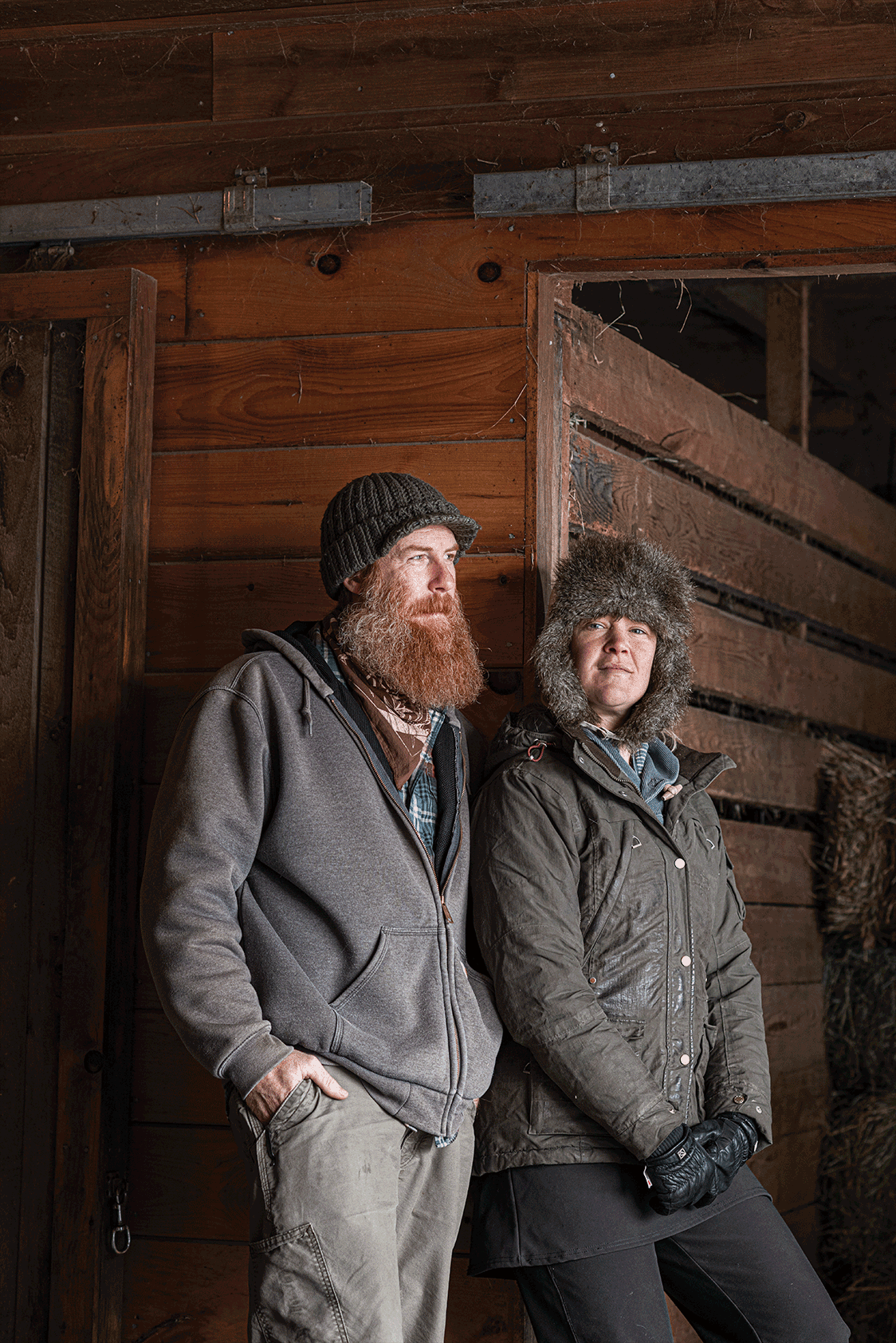 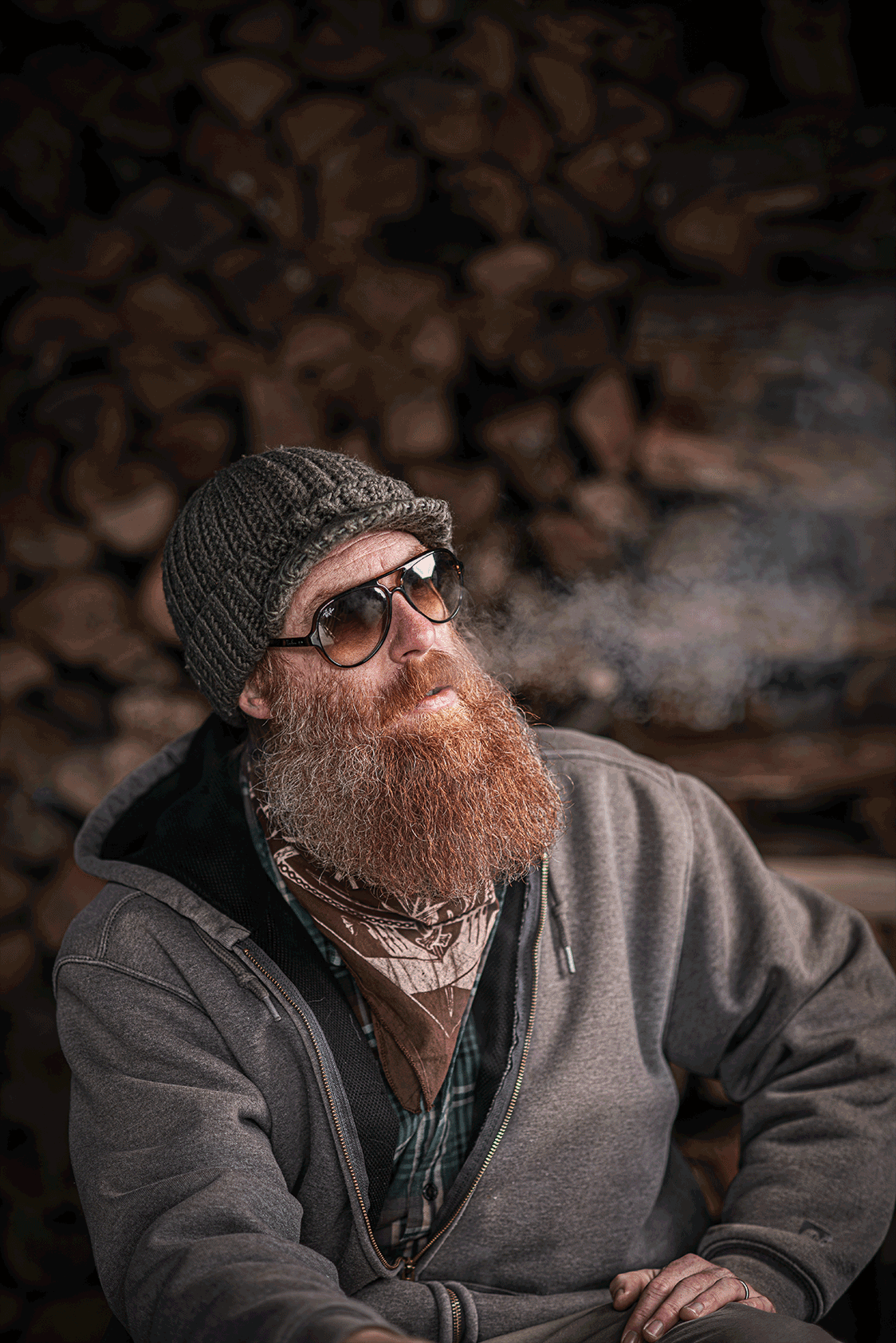 +A BAND OF HORSES:

On the farm with Luke and Carissa Mallett

And it is. For a guy who plays country-roots-rock and looks natural as can be in a cowboy hat and grew up the son of Nashville great David Mallett, the horse farm he runs with wife Carissa seems like it came straight out of a music video set. Fences stretch as far as the eye can see. Hard-scrabble cats roam around and weave between your legs. A front porch overlooks the whole spread, a Shaker-style bench to sit on. And just over there is a massive barn that holds a performance-size indoor ring.

“They say they used to keep elephants in there when the circus came through the state,” Luke says. “It was the only place big enough.”

And yet Carissa first laid eyes on Luke down at the now-defunct Big Easy, bouncing up on stage, rapping as part of the hip-hop/funk group Boombazi.

“I was like, ‘Who’s that?,’” Carissa remembers. “I got it in mind that I was going to go forward with that.” At the time, country living was the furthest thing from Luke’s mind. His other project was a straight-rap collective called LabSeven, featuring live drum and bass and some turntable action from DJ shAde. He was living in South Portland, not exactly the next stop on the rodeo.

But the inkling of the Mallett Brothers was sitting right there. Luke was living with bassist Nick Leen, and Boombazi was recording with guitarist/dobro player Wally Wentzel (there’s an unreleased Boombazi album floating around out there, by the way), and original guitarist Nate Soule was kicking around playing, and then brother Will Mallett just happened to come to Portland right as Boombazi was wrapping things up, Ben Bazi having moved to California.

“The Mallett Brothers Band was born right after that,” Luke says, “and Carissa was there to see all of it get going.”

First it was working construction all week and then playing a gig Saturday night. “Then we were just all in and doing it five days a week,” Luke says. “I was lucky that she let me from the get-go.”

Carissa had other things to worry about, though. She was working up in New Gloucester at Pineland, caring and feeding for the horses, something she’d always had an affinity for.

“My mom didn’t grow up a horse person,” she remembers, “but she decided when I was like five that she was going to get one, and I was always on horses, and then my stepdad had race horses and now the whole family does.”

That’s right: Hanging around with the Mallett Brothers ain’t got nothing on hanging around harness racing people over at Scarborough Downs.

“It was pretty … well, my mom was always after my dad to watch out for me,” she laughs. “I was just young. It was a little bit skeevy.”

But it also taught her how to love getting her hands dirty. Soon, Luke was coming up to Pineland to help with night checks, get a feeding in, keep Carissa company.

“We kind of eased into it,” Luke says. “My grandmother always had horses. My dad grew up with horses. … Trail-riding down in Tennessee was a regular thing, for birthdays, that kind of thing. That was always a big request. So, I’d been around them. I grew up on a farm that used to be working; when my dad was a kid it was working. They had sheep, draft horses — there are pictures in the house of my great grandfather with his draft horses that he’d work the woods with.”

Soon, while the Malletts were turning heads with “Walk Down the River” off their 2010 self-titled debut, or the 2011 follow up record “Low Down” Luke and Carissa were cooking up ideas for their own farm, their own place to care for their own horses and board them for others.

“I never worked a farm,” says Luke, “but I was working construction for a long time, and I kind of did everything, all through my 20s — a little bit of camp jacking, tree farm work, some firewood stuff. I did some sawmill stuff. I just tried to get all kinds of different gigs.

“The animals rule our world,” Luke says, “so that’s cool with us.”

“I’m not the handiest guy in the world, but I can figure most things out.” Including when it’s time to marry that gal who likes the horses so much.

After five years up in Gray, they found the sweet spot they were looking for here in Gorham, a place where they could really get after it. They’ve currently got 17 horses on site, seven of their own and another 10 boarders. Carissa gives lessons, mostly to adults. And she’s got a bit of a gardening habit brewing, dabbling in cannabis alongside just about any other vegetable she can think of. Pheasants have a tendency to cruise through the yard. Luke works the farm alongside her, breaking out the heat gun to defrost the watering bins for the horses lately. He had a big win the other day when he figured out how to fix the bucket on the tractor.

Oh, and he writes songs and puts together livestreams and recording sessions at Wally’s, the rehearsal space down in Portland. You know the Malletts have a full-length just about ready to go when the covid gets done with us.

Of course, every musician has a covid sob story, but the Malletts really were just about to hit it hard. They’d just landed a new booking agency; they had their first tour with them scheduled to start in March. You know, when the shutdown started.

“Everything got wiped,” Luke says, matter of factly. He’s not one to feel sorry for himself. He knows other bands have it worse, without booking agents who can move scheduled gigs into the future so they’ve actually got something to look forward to when all of this gets done with.

“We’ve got shows that were supposed to happen in April,” he says, “that are being moved into the fall, just leapfrogging and moving around. That’s vital. Everything could have been off the books with no plan. It would have been really hard to stay on top of that. … When it comes back, we plan on getting back at it.”

Until then, Luke and Carissa certainly have their hands full. When I ask them — obnoxiously — if they’re planning on having kids, they say they’re pretty happy with the animals. Their sisters have kids so the grandparents are happy enough not to nag them too much.

“The pressure isn’t what it used to be,” Carissa laughs.

“The animals rule our world,” Luke says, “so that’s cool with us.”

A bright sun shining over snow-covered pastures, blanketed horses competing with each other for time in front of the camera, Luke and Carissa wrapped in warm jackets worn smooth from use, it isn’t hard to see why. 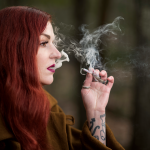