When 4/20 rolls around in 2022, Portland, Maine, will likely be among the premiere cannabis cities in the world. Given the current number of pending licenses for both medical cannabis and adult-use cannabis shops, there’s some possibility those celebrating weed’s annual holiday will find as many as 40 storefronts open for business.

That’s roughly one shop for every 1,625 residents. Which would be a truly amazing development.

Of course, not every one of those licenses will be approved, and not every potential business gets off the ground or lasts even a year, but it’s unquestionable that Portland will rapidly go from a city with a handful of medical establishments, serving only those with a card, to one of the hottest cannabis destinations in the world, with dozens of options for those over 21 and looking to catch a buzz.

Add that to the 21 breweries Portland boasts, and the seemingly countless bars and restaurants, and it’s likely we see Maine’s biggest city join the likes of Amsterdam, Prague, Marrakech, New Orleans, Montreal, Nashville, and Las Vegas as a world-class destination for bachelor parties and “hen do parties,” as they say in the U.K.

Well, at least in the summer.

But just as Old Port bars don’t represent every approach to serving alcohol, neither will there be just one kind of cannabis experience in Portland. Already, as of the first weeks of March, Portland has its first adult-use retail shops, and while they opened roughly six months after the October go-live date the state set, they’re quickly catching up with their neighboring cities and towns and demonstrating a deviation from the stereotype.

Touring Sweet Dirt’s new Portland location a few days before it’s open, situated in the iconic Wok Inn building on Forest Avenue, it’s quickly clear these aren’t fly-by-night operations we’ll be getting. An interior designer holds up printed decorations and talks about their patina. Contractors examine floor-to-ceiling window treatments. A bank of point-of-sale systems spin up. There is talk of installing a “living wall” on the building’s exterior.

We could be preparing to open a high-end spa or yoga joint. The executive team who leads the operations could be running a tech start-up. They’ve even acquired the Maine Organic Farmer and Gardeners Association’s Certified Clean Cannabis designation.

There’s a reason Sweet Dirt founders Hughes and Kristin Pope reached out to friends Jim and Rebecca Henry, now CEO and VP of marketing, to help them take their company from a targeted medical operation to a statewide business.

“They wanted to brand the whole experience,” said Rebecca. Coming from corporate marketing, she looked at some of the standard girl-in-a-bikini-with-a-bong cannabis marketing and knew there was a lot of room to grow for the industry.

“She saw a lot of bros,” remembered Jim, “and I said, ‘That’s a good point. Why don’t you go change it from within?’”

So they signed on and dove into cannabis, and they’re now confident a lot of similar suburban families will do likewise. “I surprised myself,” she said. “I loved the innovation in this space.” And she thinks the Portland location will mimic the experience of their Waterville adult-use spot, where they’ve found a large population of older customers coming in to try cannabis for the first time.

It’s not surprising for Kaspar Heinrici, who heads up business development for SeaWeed, which opened its second adult-use retail shop down on Marginal Way in the middle of March.

“I can see where if you’re a long-time resident of Portland,” he said, “you might have a fear that there will be zombified people high on weed running around your city, but that’s not what I see. I see people coming to Portland for what it is — beautiful neo-colonial architecture, all the local craft experiences — and they happen to be enhancing that experience with a 5-milligram or 10-milligram edible. And they’re having an even better time than they would have otherwise.”

Just like craft breweries, you can expect cannabis shops to have events and integrate themselves with the local community.

SeaWeed has plans for pop-up markets in their retail space, with partners like international importer Harlem House or local coffee brands setting up inside SeaWeed to give shoppers a diverse retail experience. For opening day, recently, they had a jazz duo in the corner.

“Bayside is a quickly changing neighborhood,” said Heinrici, “and we want to be part of the fabric of that change and the new experience of that neighborhood.” With recently announced plans for a large apartment complex with an outdoor pool, the rapid expansion of Bayside Bowl, the new Batson River Brewing & Distilling right around the corner, and any number of new restaurants and bars in the works, it would surprise no one to quickly see Bayside as the next hottest nightspot destination. 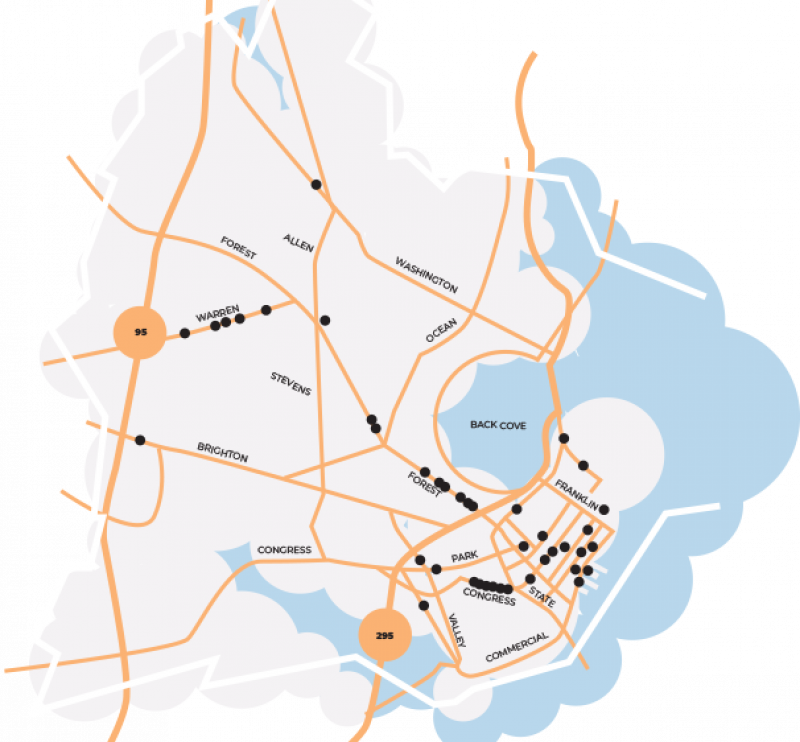 “The whole area is peppered with fun, interesting things to do,” Heinrici said, “whether it’s based on the consumption of great food, craft beer, and now add to that mix craft cannabis.”

And you can be sure that people around the country have already gotten the message.

Jon Sherman is co-owner of Origins Recreational, a cannabis company that began with retail operations in Washington State, expanded to Oklahoma, and now will open this spring a location in the old Dunkin’ Donuts building on St. John Street, right around the corner from Hadlock Field. He sees Portland’s potential bright as day.

“One of the most exciting parts is changing the paradigm and people’s preconceived notions about cannabis,” he said. Remember when a screw cap on a bottle of wine meant you were likely to consume it out of a paper bag? Perceptions change. And cannabis perceptions will change rapidly, Sherman predicted.

“As the market matures,” he said, “you’re going to have a lot of players who are really trying to paint it in a different light.”

While some will embrace the pot-leaf, psychedelic branding, others will go in a different direction. He points to their location in Seattle’s Dexter neighborhood, where “it’s very hard to tell it’s a cannabis store. We don’t have the traditional neon green lights. There’s an aspect of preserving the image of the community. It just feels comfortable going in.”

He also predicted events like beach clean-ups or guided hikes or tree plantings that will help cannabis companies show their commitment to the local community and its overall wellbeing.

Once the city truly opens up from its pandemic slumber, you can be sure that cannabis companies will be right there with breweries and bars in encouraging fun gatherings — the only difference being an inability to offer on-premise consumption. But that may change.

After 2023, there’s a possibility we’ll see cannabis social clubs — as they now have in California — and places combining live music, cannabis consumption, and food in ways that will really rev up the fun.

Jim and Rebecca Henry envision a future with food and cannabis tastings, cannabis cooking clubs, and more. Heinrici said SeaWeed’s South Portland location is all set up for a back-deck experience and would love to be able to offer samplers like breweries offer tasting flights. Sherman predicted a farm-to-table atmosphere, where the growers are on site and mingling with those who want every detail about how their weed is grown and cured.

While Portland may get a bump from the bachelorette party crowd, it’ll still be Portland. It will still be accessible and walkable and awfully cold in the winter. And it will still value local, craft experiences — whether for food, beer, or cannabis.

ME Plant Based Therapy