CARVING OUT A SPOT

The art of the upgraded trading card 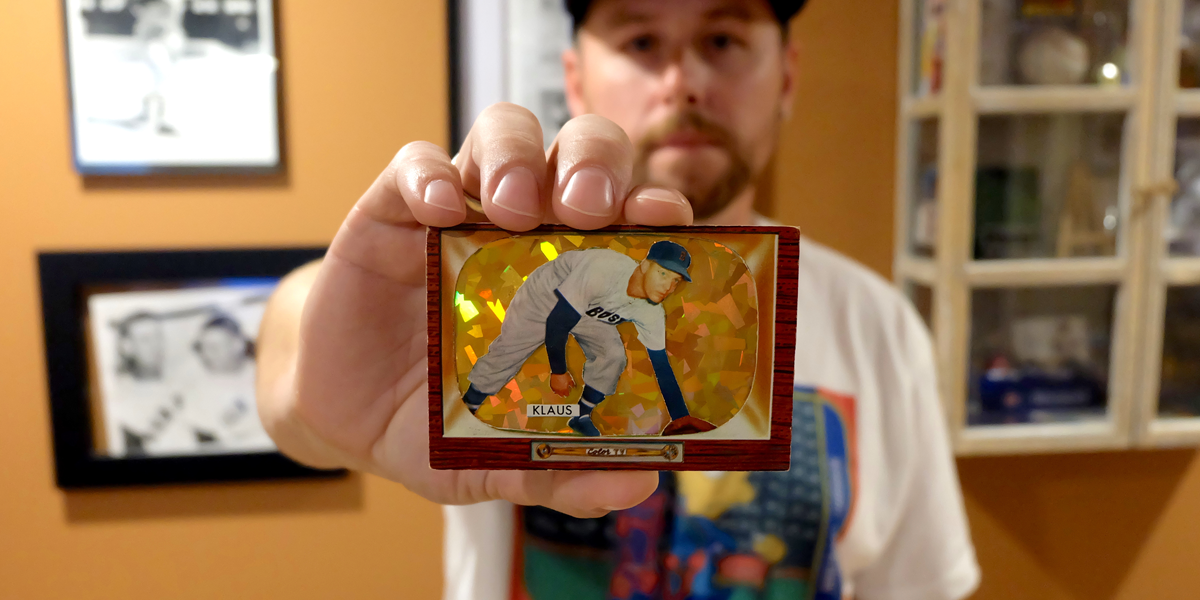 During the pandemic, collectibles have exploded. People are paying $1,000 for old Barbies; $500 for vintage Hotwheels; $400 for a Cabbage Patch Kid in good condition. The mix of disposable income not being spent on restaurants and travel and the nostalgic desire for comfortable reminders of a simpler time has created white-hot markets for all manner of things.

“People are getting VHS taps graded and they’re selling for thousands of dollars,” marvels Tom Fallos.

But that’s not where he’s focused. No, as the Card Carver, he’s got his eye on trading cards, mostly of the sports variety. But rather than simply hunt and trade for rarities of value, Fallos is an artist who enhances cards by carving them up, layering in foils and vinyl, remixing them with artifacts of popular culture, and generally making them cool as fuck.

Close observers may know Fallos as Tommy Knottz, a rapper who released a pair of albums in the early 2010s. Though the change in art-making isn’t as drastic as it might seem.

“It’s a lot like making a hip-hop beat,” he says of his new calling. “You cut it up and then you put it back together the way you like it and create something new.”

And these really are something new. In their depth and tiny detail, they are not unlike the shadow box art of someone like Andy Acres out of London, whose Chimerical Reveries have found admirers in the visual art world. Often, Fallos stacks multiple cards to create depth and dimension, carving out a scene that seems to jump from the plastic case in which his creations are kept safe.

Take them out and you are struck by their near weightlessness, their nearly ephemeral nature.

Cards, though, are big business, and getting bigger. In February, eBay reported trading card sales were up 142 percent on their platform, with four million more cards changing hands in 2020 over 2019. Someone spent $556,000 on Tom Brady’s rookie card last year. On eBay.

Now, a growing community of card artists are coming at value creation through not just rarity and appeals to pristine quality, but also the skill and creativity that makes art of all kinds sell for big dollars.

Fallos was always a card collector — especially inspired by great uncle Billy Klaus, who played for the Red Sox and both the Boston and Milwaukee Braves over an eight-year MLB career — but a light turned on when he saw the way people were carving up cards.

“I was like, ‘I can do this better than a lot of guys,’” he says, matter of factly. And so, back in February, he started giving it a go, with a craft mat and a lot of razor blades and cool stuff he found at places like Michael’s and Hobby Lobby. Where he especially distinguishes himself is in bringing elements of ’90s culture into his mix-ups, with Simpsons references, Wu-Tang, comic book heroes, even other visual art — as long as they’re in the trading-card format.

And he’s selling them. So far, he’s largely moving them through Instagram, where people like “Donny B Collectibles” run auctions on a regular basis. His first auctioned card did $410. His highest grosser so far is a mash-up where he’s made it appear that Michael Jordan is blocking a shot by LeBron James. A repeat buyer saw him post it and snapped it right up.

The Lebron card probably would have garnered $50 on its own, but “I’m not afraid to cut up a card,” Fallos says. “I’ve got a binder full of things waiting to be cut up. I’ve got an ’89 [Ken] Griffey Jr that a lot of people covet, but I’m not afraid to cut it because I know the value my work brings.

Nor is he afraid to go big. He has an idea for a Kobe card backed with real snakeskin, as an homage to his Black Mamba nickname; maybe something with the classic Louis Vuitton pattern. “I’d love to work with someone who does sneakers and drop a combination,” he says, “where the shoe uses the same material I use in the card. I haven’t really scratched the surface yet.”

Plus, there’s whole NFT craze to tap into. He already has plans for a “Bitcoin Brady” card you’ll only be able to buy with Bitcoin, and he’s releasing a card with rapper Termanology that he hopes will tap into burgeoning collections held by serious hip-hop artists with big wallets (both real and virtual).

While trading cards may be big business, though, there’s still a lot of kid in Fallos and the artists who work in the field. “It’s awesome when there are shows and you can go in there and find good players,” he says, sounding not unlike any middle schooler. “I pulled a wrinkled Rickey Henderson card that would be hundreds of dollars if it were mint, for like $2. I don’t care what condition it’s in — it’s a Rickey Henderson rookie card. It’s awesome!”

Then he pauses: “I still might cut it up some day.”

Where To Get Trading and Grading

While card shops were virtually everywhere in the 1980s and 1990s, the current craze is often just a matter of online auctions and digital communication. But that doesn’t mean there aren’t some hold outs leftover, and anyone who’s serious will tell you pictures and videos don’t do cards justice.

Sometimes you just need to see it to believe it.

If you’re looking for new cards in packs, you can find some weird stuff in places like Marden’s and Walgreens, along with plenty of non-sports trading cards in places like Bull Moose, but if you want to get tight with the collectors, here are some spots Tom Fallos recommends:

Originally online only, the Coliseum eventually found a brick-and-mortar home at the Willows, in Mechanic Falls, where you can also hit a three-story flea market while you’re in the area. If you’re looking to collect stuff, it’s a one-stop-shop dream. They’re also the ones putting on events at the Elks in Augusta if you’re looking to find a bunch of vendors in one place. Stop in and try not to fall too far down the rabbit hole.

Yeah, you can get jewelry here, but that’s just the tip of the iceberg for collectors. There’s a huge selection of unopened sports cards, one-off cards of all levels of value, and especially Topps and Upper Deck. But they’ve also got a bunch of 2013 and 2018 World Series gear, like bobble heads and Lego versions of players, and all kinds of beanie babies and webkins. If you’re into that kind of thing.

Among the deans of the trading card realm in Maine, owner Brad Shaw has been operating here since 1976, with all manner of sports cards and now various other collectables, including Magic cards and much more. It’s as old-school as it gets, and if you want to give legit trading a try, show up on Sunday morning and ask to see what everybody’s got. Maybe you’ll find a match.

It’s called Don’s, but the owner’s name is Paul. Don’t ask. This is really a sports-only kind of place, where the huge card collection, with tons of one-offs, is supplemented by posters, old Sports Illustrateds, figurines, and various signed items. Feel free to plan to spend some time inside. Paul loves to chat. And there are plenty of $1 grab bags and other inexpensive items if you’re just looking to pick up something fun for the kids.