PUTTING ON THE SUIT

The allure — and the job — of becoming Santa 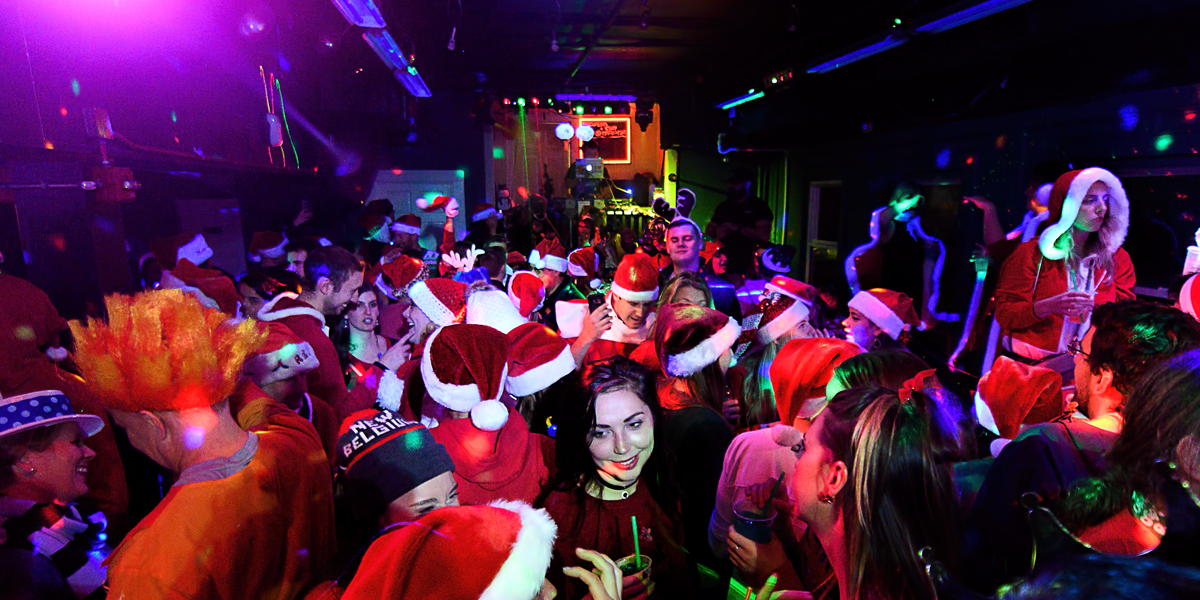 Someone’s gotta be Santa. In fact, every year, a whole lot of someones have to be Santa. From the Maine Mall to the Kittery Outlets to the Presque Isle Holiday Light Parade, there’s likely a dude in a red-and-white suit and shiny black boots waving to the kids and handing out candy canes.

But who would do such a thing, and why? “I started by accident,” admits John Berry, who as Santa John has been wearing the suit for more than a decade now. “I was volunteering at a non-profit and Big Lots in Auburn had an annual thing where they did a Toys for Tots event and their Santa got sick. So they called the place I was working and they asked, ‘Can anyone play Santa?’ And everyone looked at me because at the time I had quite a big beard. I said, “But it’s not white!’”

In quick fashion, though, he figured out how to use stage make-up — aka “white shoe polish” — and they had a suit for him, “and I liked it. So I figured maybe I’ll actually get my own suit.”

Covid stopped him in his tracks, to the point where he actually shaved his beard to keep himself from going out there among the kids, and this year he’s still on the sidelines, but he’s eager to get back out there.

“It was fun seeing the reaction of so many people, adults included,” he says of the immediate attraction. “Often, Santa appeals to adults more than children. It’s kind of cathartic to talk to essentially a cartoon character and sometimes people need that break. I enjoy talking to people. I’m a people person. I kind of hate that term, but it is what it is, and I enjoy it.”

Sam Cousins knows that feeling of becoming a cartoon character quite well. As one of the organizers of SantaCon, he’s been bringing people together in Santa suits since 2008 — where there were just 20 of them. By 2019, the event had grown to 500+ people in costume, bar-crawling across Portland and bringing merry to whomever they happen to come across.

“But by having this big group that’s together, it’s okay to do something absurd. Look at us, we’re a couple of hundred people standing around in a Santa suit. It’s ridiculous. But that’s okay. We’re a group, we’re all here, and we’re all friendly.”

Indeed, the event has grown beyond just Santas. There are elves and reindeer and wise men and all sorts now who don costumes to come and conduct revelry. If there are “rules” for the event, which is pretty loosely organized on the best of years, it’s that you have to wear at least some kind of costume. No fair just hanging around like a normal person.

“I think someone just decided Santa was fun,” Cousins says. “Christmas is for kids. If you ask anybody, they’ll say it’s a lot of stress to do all the things for the kids, to be kid-friendly. So, Santacon is just, let’s do adult stuff. SantaCon is not for kids. As much as someone wants Santa to go do the Santa kid things, this is about adults going out and having fun.”

“I’m known as a Santa Portrayal Artist,” he says. “We have a community. Some people are Santas 24/7/365, but I hate that concept. I think Santa should appear in the fall and then disappear, and I think Santa is more magical when that happens.”

“It’s bizarre,” Berry says. “For myself, I’m not doing any appearances this year. I may do one for a local family that I’ve done for many years, but I know they’re vaccinated and that sort of thing.” For gigs in the Portland area and Southern Maine, he charges $120 an hour and up, more if it’s further to travel. Some Santas get upwards of $750 an hour.

Nor is covid the only controversial topic in the community. Ask about “real-beard Santas” and Berry gets a little fired up — “that’s preposterous bullshit; because you’re genetically inclined to grow a beard, that makes you somehow superior” — and not only because it’s going to take a long time for him to get his beard back in shape. And while Berry was happy to get back to our request for interview, and likes to hit up Central Maine Flower for his gummies, more than one other Santa decided they didn’t want to be associated with “Beer & Weed.” As with any profession or hobby, there are many ways to be Santa and every Santa has their own opinion on the matter.

Mall Santas are a bit down the pecking order. Better to be at a great party where you can move about and not be confined to the chair.

Of course, every time Berry walks into a room, there’s that little butterfly of nervousness just like any performer has, but that quickly disperses. “It’s very freeing,” he says. “I walk into a room and it’s like ‘Santa!’ Everybody knows Santa. It’s kind of magical. It really is.

“And it’s nice to become someone else.”

Looking for a Santa to come entertain the kids at your holiday party? Well, book well in advance, but the best place to start looking, says Santa John, is GigSalad.com. There, you can outline what you’re looking for in terms of length of time, budget, the type of event, location, and all the other gritty details, and a Santa will get back to you with an offer you can accept or negotiate.

Best, though, is to listen up for stories of great Santas. Nothing’s better than word of mouth, and then GigSalad doesn’t get a cut. If you’re at a party and you see a Santa, it’s totally cool to find a down time and ask about availability. At least most Santas think so.

Where To Get Your Santa On

While SantaCon might be on hiatus due to covid, and certain Santas are taking the season off, that doesn’t mean Maine will be Santa-free this season. There are all manner of good holiday events that happen outside where you can bring the kids — or not — and get a good dose of holiday cheer alongside a dude in a Santa suit.

Heck, you might even be able to pick up a tree or a wreath or something while you’re there.

This is a parade that’s worth making a trip, with a competition that rewards floats of all manner of ingenuity, but does not allow any Santas except for the one true Santa on the Chamber of Commerce’s float. Talk about dedication to authenticity! You can give out candy, music is encouraged, and there are no limits on the ridiculousness of your float-creation, but including a Santa gets you immediately disqualified. We’re unclear how often some carpetbagger rolls in and grabs the grand prize, but seems like that would be hilarious.

This is not your standard Polar Express kind of thing. This is a real-deal train ride that lasts as long as an hour and a half and takes you through some beautiful territory while your kid waits to be visited by Santa. Every kid gets some cocoa, some cookies, and a little toy out of Santa’s bag. You might even grab a candy cane for yourself. We’re not sure what happens if you show up without kids, but we’re betting is fun, regardless. Heck, they’re singing Christmas songs on a train. And don’t forget to swing through the train depot, which they’ll have decorated in Victorian style.

Okay, so maybe Kotzschmar Organ player James Kennerley won’t be in full Santa regalia, but he’s usually wearing something close for this annual Christmas celebration of traditional music that returns this year after a 2020 hiatus. There will be singers, bell ringers, a brass band, and all sorts of special guests. Perhaps even Santa! Best of all, they always finish with a carolling singalong, so vax up and bring your pipes.

Christmas by the Sea

In general, this thing has it all if you’re looking for the full Christmas experience. They’ve got music lined up, a “Taste of the Season” foodie event, a parade that rolls down Main Street, ornament making for the kids, a big-time bonfire, hay rides, holiday crafts you absolutely don’t need, and, of course, a chance to visit with Santa. If there ever was a Maine event designed for eating 50mg or so and just wandering around staring at people, this is it.